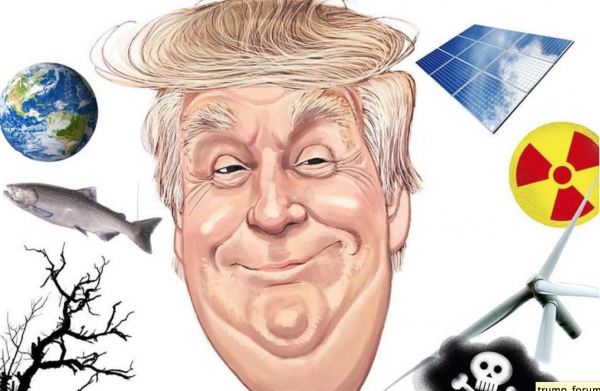 By: Matt Weiser
To understand how the incoming Trump administration could muck around with environmental issues in California, let’s turn the clock back to 2003. That’s when Julie MacDonald decided the Sacramento splittail should no longer be an endangered species.
MacDonald, then a deputy Interior secretary appointed by the George W. Bush administration, used her authority to rewrite scientific findings by Fish and Wildlife Service biologists, who concluded the splittail fish needed Endangered Species Act protection. But MacDonald – a civil engineer, not a biologist – feared that conclusion would affect money-making potential on the farm she and her husband owned in the Yolo Bypass.

So the splittail was denied ESA protection, simply because MacDonald edited some documents. And it was just one among dozens of ESA actions MacDonald meddled with, many intended to enrich herself and her political allies at the expense of the environment.

Donald Trump, the first real estate developer ever elected president, will have many similar opportunities to twist federal policy to his advantage. Indeed, issues of the environment and public lands offer a president and his appointees enormous latitude to alter federal policy.

“There’s not much reason to be optimistic, ” said Holly Doremus, a professor of environmental law at UC Berkeley. “The people he is talking to most, I would say, are a scary bunch from an environmental policy angle.”

Trump has said he wants to throw open public lands to oil and coal extraction. He wants to end clean air rules meant to limit greenhouse gas emissions from power plants. And he wants to throw out the “Waters of the U.S.” rule, adopted by the Obama administration to clarify which water bodies are shielded from development under the Clean Water Act.

On many other matters, we know almost nothing about Trump’s plans, because environmental issues were almost never discussed during the campaign, and Trump has never worked in government. Among the policies outlined on his campaign website, no environmental platform is described. His new transition website,  greatagain.gov, offers an ambitious energy development manifesto but no environmental agenda.

This makes his choice of key agency leaders important, because they will likely craft their own agendas. The nominees emerging so far only prompt more concern:

?  Interior secretary: Montana Rep. Ryan Zinke, is a climate change skeptic who wants to expand the use of public lands for fossil fuel extraction and has opposed designating new national parks.

“I am deeply, deeply disturbed, ” said Patricia Schifferle, director of Pacific Advocates, a consulting firm that works with a number of environmental groups. “Allowing extractive industries to run our public lands, our water resources protection, our air protection is fraught with huge costs to American citizens.”

California environmental groups are so alarmed that some are assembling a “survival fund” of sorts to sustain important programs that might be eliminated by Trump. Some of these programs operate in partnership with the state to improve water quality and restore habitat. Without federal support, they could grind to a halt.

Trump’s influence will be especially broad, because Republicans will control Congress. They will be unlikely to check Trump’s regressive environmental policies, and he’ll be unlikely to veto those coming from Congress.

“The reality is, we’ve never seen somebody in this position, ” said Jay Ziegler, director of external affairs for The Nature Conservancy in California and a special assistant to Interior Secretary Bruce Babbitt during the Clinton administration. “There are real concerns about public lands management, natural resource management, and priorities that have been suggested about water resources management.”

Doremus said a Trump administration could easily change many environmental programs, although some might take years.

Trump wants more offshore oil drilling in federal waters. This is governed by a five-year plan that identifies areas available to lease, and the Obama administration just approved a new plan that starts in 2017. Trump could amend it to add new leases, a process that could take a year or more.

Trump has also suggested he wants more logging in federal forests. This would require amending separate timber harvest plans governing each national forest. But so-called salvage logging of dead trees, possibly including those killed by drought, could be expanded faster.

Other moves would be relatively easy. Doremus says it’s likely Trump will weaken or throw out the roadless rule, a 2001 Forest Service policy to protect wilderness qualities by decommissioning old roads and limiting new ones. It’s been opposed by off-road vehicle enthusiasts. Trump could wipe it out with a pen stroke, although lawsuits would likely follow.

“In the case of managing public lands, there’s a lot of discretion in that statutory framework, ” Doremus said. “So what the agency wants to do is going to be what it does.”

Other rules could simply be sloughed off by failing to defend them in court. For instance, the Obama administration is appealing a federal court decision that struck down its policy regulating fracking on Bureau of Land Management energy leases. Trump could order Interior to drop the appeal, rendering the fracking rules null and void.

In some matters, California could throw its own legal weight around to protect environmental values.

California, for instance, is one of the few states with its own Endangered Species Act. But because of chronic underfunding of the state Department of Fish and Wildlife, California rarely enforces its law and allows the federal ESA to protect wildlife instead.

At least 550 species nationwide await protection under the federal ESA, a list likely to grow under Trump. California could step up to protect those critters within its borders using its own ESA law. But this would require more manpower and money than state leaders have been willing to invest.

Similarly, California can remain a leader on climate change even if Trump believes it’s a Chinese fabrication. The state can continue demanding the world’s strictest vehicle emission controls, incentivize green energy and strike partnerships on emission control with other states and nations.

But it probably can’t rely on the federal government as a partner any longer. For example, California has few tools of its own to limit greenhouse gas emissions from power plants.

The water infrastructure bill approved by Congress last week will hand Trump powerful new tools, thanks to amendments by Sen. Dianne Feinstein. One clause grants the secretary of Interior, for the duration of Trump’s first term, single-handed authority to approve and build new water-storage reservoirs without a customary vetting by Congress first. It also provides $335 million for the secretary to support these projects.

This power applies throughout the West. But in California it lists four specific projects eligible for federal support: Sites reservoir in Colusa County; Temperance Flat reservoir on the San Joaquin River; and enlarging Shasta and Los Vaqueros reservoirs.

This means Trump already holds unprecedented power over California’s environment, and he hasn’t been inaugurated yet.

WHY PESTICIDES COULD BE THE BIGGEST RISK POSED BY CORPORATE AGRICULTURE

WHAT’S THE DIFFERENCE BETWEEN ORGANIC AND PESTICIDE FREE FOOD?

FIND OUT WHICH AGRICULTURE IS SPRAYED WITH THE TOXIC ORGANOPHOSPHATE PESTICIDE