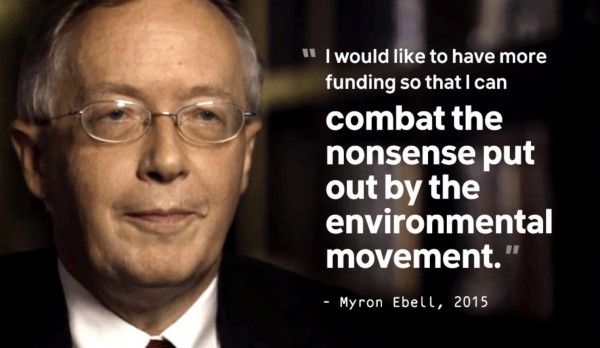 President-elect Donald Trump has said that he does not believe the planet is warming as a result of human activity — despite the research-backed consensus reached long ago by researchers across the globe.

He tweeted in 2012 that “the concept of global warming was created by and for the Chinese in order to make US manufacturing non-competitive.” More recently, Trump has pledged to roll back President Barack Obama’s Clean Power Plan — a set of rules that requires states to substantially reduce their emissions over the next few decades.

Right now, his transition website says, “America’s environmental agenda will be guided by true specialists in conservation, not those with radical political agendas.”

The implication seems to be that researchers who accept climate science will have no place in his Environmental Protection Agency, or perhaps his government.

So what will Trump’s actual environmental policies look like? Here’s what we know.

Trump has picked a man named Myron Ebell to oversee the EPA transition.

Ebell is not a scientist and has no degrees or qualifications in climate science. But he serves as director of global warming and environmental policy at the Competitive Enterprise Institute (CEI), a libertarian advocacy group in Washington, DC.

In practice, that means he spends his time rejecting and trying to discredit scientists who work to understand the global climate.

In an interview with Business Insider in August, Ebell repeatedly referred to climate scientists as “global warming alarmists” and suggested that climate research is in fact an arm of a coordinated political movement.

Business Insider spoke with several climate scientists who described Ebell as a kind of gadfly — someone’s whose views they must occasionally stoop to address in forums and debates where he’s brought in to represent a discredited anti-climate-change perspective, but not a particularly serious person.

“He doesn’t really know anything about science, ” said Gavin Schmidt, director of the Goddard Institute for Space Studies and a top Earth scientist at NASA who has faced off with Ebell in the past. “He uses science like a talisman.”

Ebell’s technique, Schmidt said, is to point toward “some little fact” and use it to extrapolate some larger irrelevant and scientifically incorrect point.

Even if Ebell’s scientific claims may not sit well with actual scientists, there are those who have found his perspective valuable.

CEI used to rely significantly on funding from ExxonMobil. As The Washington Post reports, it now receives funding from Donors Trust.