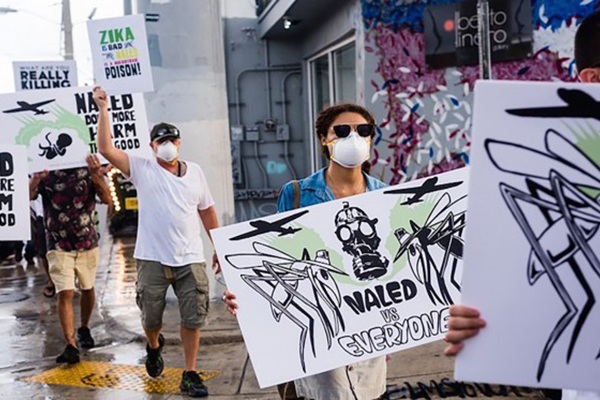 When the Zika virus hit Miami Beach last month, the U.S. Centers for Disease Control and Prevention said it wasn’t even possible to spray pesticides over Miami Beach because the buildings were too tall. But — at Gov. Rick Scott’s request — the county has changed course. Planes will begin spraying the controversial pesticide naled over South Beach this Thursday morning, worrying environmental activists who say naled does too much collateral damage to humans and the environment.

ow, more than a hundred people are planning an anti-naled protest from 9 to 10 a.m. outside Miami Beach City Hall today.

The protest is scheduled to coincide with a 10 a.m. naled-related “workshop” that Miami Beach Commissioner Michael Grieco is holding today to discuss whether the city should fight the state’s aerial-spraying plans.

“Please bring SIGNS if you have them, ” protest organizers wrote on Facebook. “Be creative. After the protest there will be a Commission ‘workshop’ in the chambers (3rd Floor) at 10:00AM regarding the County/State’s unilateral decision to spray areas of Miami Beach with Naled. Commissioner Grieco has encouraged every resident who wishes his or her voice heard on the matter to attend.”

Although the CDC and U.S. Environmental Protection Agency say naled can be safely sprayed in tiny doses from planes to fight Zika, the pesticide has been met with protests. After the CDC clandestinely shipped naled to Puerto Rico to kill Aedes aegypti mosquitoes in July, the island erupted, and scores of protesters persuaded Puerto Rico Gov. Alejandro García Padilla to return the pesticides.

Miami-Dade County and state officials were caught in a bind once Zika hit, and they put all hands on deck to combat the crisis. But as the naled-spraying missions mounted, questions arose over whether the government’s short-term Zika solution would have long-term consequences.

A few weeks after Miami-Dade County began spraying naled over Wynwood,  a group of protesters marched through August’s Art Walk in Wynwood wearing gas masks and holding signs that read, “Naled vs. Everyone, ” “Naled does more harm than good, ” and “Zika is bad; naled is a neurotoxic poison, ” among other slogans. Farmers in South Carolina now say anti-Zika naled spraying killed 2.5 million bees in their state.

The family of pesticides to which naled belongs — called “organophosphates” — is highly controversial. Though the EPA says naled can be sprayed in small doses, the agency still bans organophosphates from indoor use and use in dog collars out of fear that the chemicals — which in larger doses attack the nervous system like sarin gas — will come in contact with children. National Geographic has called organophosphates “common but deadly” and pointed to a 2010 Emory University study that suggested that fetal and early childhood exposure to organophosphates could lead to neurological conditions like attention-deficit/hyperactivity disorder.

Naled is banned in the European Union. That region’s regulators say the pesticide poses an “unacceptable risk” to the environment and human health.

But Miami-Dade Mosquito Control experts say they have safely used the pesticide for 40 years. The county, however, has overwhelmingly sprayed the chemical by air over crop fields rather than populated cities. When Mosquito Control began spraying pesticides on the ground around Miami Beach last weekend, city officials were quick to reassure residents that the ground crew was not using naled.

Commissioner Grieco, who says the county should not spray “neurotoxins” over the city, called for both tomorrow’s informal workshop and an emergency city council meeting to try to stop the spraying.

However, not only did the rest of the city commission disagree with Grieco, but he said via Facebook yesterday that “a majority of the city commission” also actively denied to discuss the pesticide. Grieco is asking that the county “at least postpone spraying until public sentiment is vetted.”