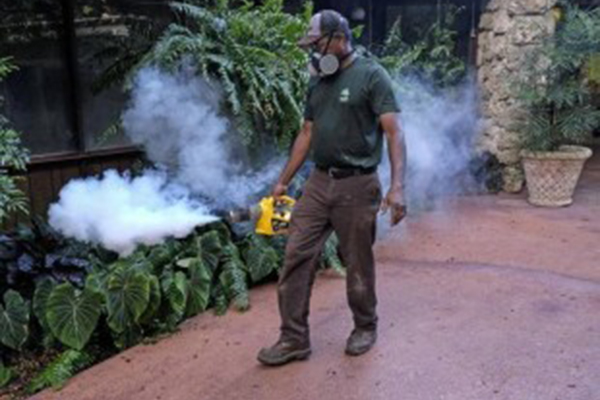 When the Centers for Disease Control and Prevention (CDC) tried to spray naled, a controversial pesticide used to kill mosquitoes, over Puerto Rico to stamp out the Zika virus last month, the island’s residents erupted. San Juan’s streets filled with protesters, and Puerto Rican Gov. Alejandro García Padilla forced the CDC to return its shipments of the chemical.

But when Miami-Dade County Mosquito Control experts chose to drop that very same pesticide from planes over Wynwood to combat Zika last week, Floridians barely made a peep despite the fact that naled is banned in the European Union. That region’s regulators claim the pesticide poses an “unacceptable risk” to human health.

Though the U.S. Environmental Protection Agency (EPA) and CDC say naled can be safely sprayed in small amounts to kill mosquitoes, some American environmental scientists disagree and say spraying the chemical over a populated area ranges from a “necessary evil” to downright irresponsible.

In a dark twist, some studies have even shown that the family of chemicals naled belongs to can harm a growing fetus — which means the county could be harming the very same pregnant residents it’s trying to protect.

“We all have heard of the intention to fumigate Miami with naled, and with all due respect, we are starting to see in Florida a repeat of what we went through: Public servants not reading the science that is in front of them, ” writes Melendez-Ackerman, who was active in the movement to ban naled in Puerto Rico.

In an interview with New Times, she criticizes both the U.S. government and Miami-Dade County for rushing to kill mosquitoes without thinking enough about the long-term costs of aerial naled spraying.

“People don’t know all the risks, ” she says. “This degrades into a carcinogen. It’s in the EPA documents.”

However, a county Mosquito Control spokesperson tells New Times the county abides by a host of state and federal spraying guidelines and is doing all it can to keep citizens safe. The county sprays only about an ounce of naled per acre of land, spokesperson Francisco Calderon says.

“Miami-Dade County has been using naled safely for approximately four decades, ” Calderon says via email. (The county has mostly used that pesticide in agricultural fields, though, rather than in urban areas.) “We only use it during aerial spraying operations, not handheld or truck spraying, per CDC and [Florida Department of Health] recommendations. The insecticide is registered for use by both the EPA and [Florida Department of Agricultural and Consumer Services]. It can only be applied by a licensed professional, which is what we do.”

Though the EPA says naled is harmful only in large doses, the chemical is part of a controversial family of insecticides called “organophosphates, ” which some environmentalists say pose massive health risks to humans, animals, and plant life. A 2013 National Geographic report called organophosphates “common but deadly” and said they attack the human nervous system the same way chemical weapons such as sarin gas attack. The pesticides were blamed for killing at least 25 children in India that year. At acute levels, the pesticide stops a person’s neurotransmitters from working.

“It’s a painful way to die, ” Emory University exposure scientist Dana Boyd Barr told the magazine. “You end up suffocating because you are essentially paralyzed.”

A 2010 study said organophosphates are responsible for killing 200, 000 people a year in developing countries.

Though the EPA maintains naled can be sprayed safely in small doses, the organization has asked farms and governments to “voluntarily eliminate” organophosphate usage. The agency also bans organophosphates from home use. Also, naled is specifically banned from use in flea collars out of fear that children will come into contact with the pesticide.

Also frightening,  a 2010 Emory University study showed that prenatal and early-childhood exposure to organophosphates can increase the risks of some neurological disorders, such as attention-deficit/hyperactivity disorder.

For years, the Washington, D.C.-based National Resources Defense Council (NRDC) has called for reductions in organophosphate spraying. In Miami’s case, the group says that although the seriousness of the Zika epidemic might warrant emergency naled usage, the county needs to do more to let citizens know the chemical could cause poisoning or lead to long-term health effects.

According to a county spokesperson, Miami-Dade Mosquito Control sprayed naled twice via plane in the past week — Thursday, August 4, and Sunday, August 7. The county plans to spray the pesticide again, this Sunday, August 14. (Planes have also sprayed a “safer” chemical called “Bti, ” which kills mosquito larva.)

“When they’re spraying, close your windows, and turn off your air conditioning to avoid drawing the pesticide into your house, ” Sass says. “Make sure you take children’s toys inside, and wipe things down before you let people contact them again, especially a slide, barbecue, or pet food bowls, and especially things that come in contact with kids.”

Not all scientists agree that care should be taken during the spraying, though. Dr. Naresh Kumar, an environmental scientist at the University of Miami, says he thinks people are blowing the risks “out of proportion.” Though he agrees that massive exposure to naled is harmful, he says virtually all pesticides are a form of poison and can never be truly administered “safely.” He adds that exposure to pesticides such as naled could cause lower birth weights in infants.

“What do you want to take, ” he says, “a baby with a birth defect or a baby with a low birth weight? Everything comes at some cost. There is no safe solution. One has to weigh the costs and the benefits.”

But last month, the Puerto Rican government rejected that argument.

Zika has hit the U.S. commonwealth harder than almost any other area on Earth. But when the CDC announced plans to spray the island with naled, residents protested en masse. The CDC argued that mosquitoes there had become too resistant to “safer” pesticides and, according to the New York Times,  clandestinely shipped naled to the island. Residents found out only after a local TV station reported on the shipment.

Given the island’s long, complicated history with U.S. colonization, Puerto Rican officials were incensed. Governor García Padilla accused the CDC of “blackmail” before returning the pesticides. The CDC then apologized.

Melendez-Ackerman, who emphatically fought naled usage in Puerto Rico, says Miamians should not sit idly by while planes soar overhead wafting organophosphates into the air.

“I am not asking you to trust me, ” she says. “I am just asking you to read. There is so much science out there, so many studies, but people just refuse to read them.”