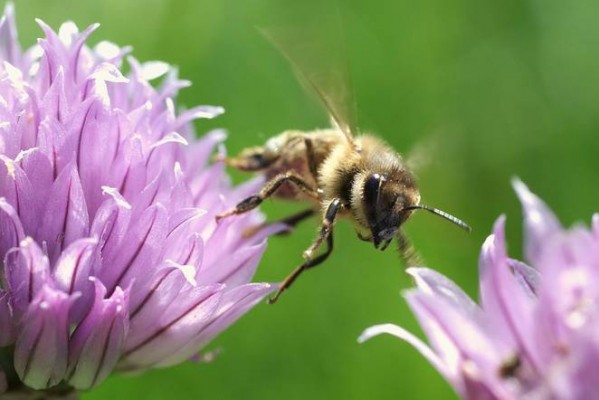 While farmers will still be allowed to use neonicotinoids, the popular pesticide will be banned from consumers.

“Maryland’s honeybees are being massacred, and the weapon might be in your house” reads The Washington Post headline. And indeed, the mid-Atlantic state lost more than 60 percent of its hives last year, each with up to 20, 000 honeybees. States across the country have been seeing losses with the ongoing tragedy of Colony Collapse Disorder. While scientists haven’t been able to pinpoint a single cause behind the deaths, and while some years aren’t as bad as others, most agree that pesticides are an important contributor.

Neonicotinoids are a potent class of systemic pesticides introduced to agriculture in the 1990s. They were made available to consumers more recently because they were thought to be safer for bees than other pesticides; and with increasing consumer use beekeepers have noticed increasing bee deaths. Neonic products include Knockout Ready-to-Use Grub Killer, Ortho Bug B Gon, and All-In-One Rose & Flower Care.

The USDA has failed to declare a link between bee deaths and neonics, which are a key part of an expanding global insecticide market projected at around $15 billion in revenues. The EPA is reviewing the link between several varieties of the insecticide and Colony Collapse Disorder, its findings will not be released until 2018.

Several years ago a large team of global, independent scientists created a task force and after reviewing 1, 121 independent studies, concluded that neonics play a major role in bee declines; in their report they said neonics should be restricted.

(Meanwhile, Civil Eats reported last year on a senior scientist at the USDA who filed a whistleblower complaint accusing the agency of suppressing research findings that could also call into question the use of neonics.)

The Maryland legislation was passed in both the state’s upper and lower chambers, notes The Washington Post, and is now poised to be signed into law by Gov. Larry Hogan. While other states have made attempts to curtail the use of neonics, no other legislation has made it this far. The law is set to go into effect in 2018; farmers who better understand how to apply the chemicals will be exempt from the ban.

Del. Anne Healey, D-Prince George’s County, who authored the House version of the bill, says that the new law would “be a landmark, and it would set a standard that maybe other states would follow.”

WHAT’S THE DIFFERENCE BETWEEN ORGANIC AND PESTICIDE FREE FOOD?