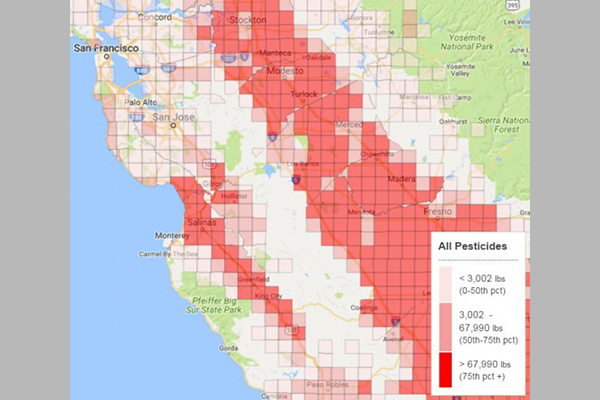 Salinas, CA – Pregnant women living within one kilometer (0.62 miles) of fields where certain pesticides are applied have children who show a measurable decrease in IQ and verbal comprehension skills by the time they are seven years old, according to a new study by the Center for Environmental Research and Children’s Health at UC Berkeley’s School of Public Health.

The study, “Prenatal Residential Proximity to Agricultural Pesticide Use and IQ in 7-Year-Old Children” in Environmental Health Perspectives, can be found here: http://ehp.niehs.nih.gov/EHP504/The study team looked at 283 women and children from the agricultural Salinas Valley enrolled in the long-term Center for the Health of Mothers and Children in Salinas (CHAMACOS) study.

They found that at age 7, the children of mothers who lived during pregnancy within 0.6 miles of applications of organophosphate pesticides had declines of about 2 IQ points and 3 verbal reasoning points per 522 pounds applied nearby. The authors note that the loss of IQ points corresponds to thousands of dollars in reduced earning potential in adulthood.

Organophosphates are neurotoxic to both insects and humans, even in very small amounts. Banned by the EPA for most residential uses in 2001, they continue to be among the most commonly applied agricultural pesticides in California, with more than 4.6 million pounds applied in 2014.

“There is ample evidence that exposure to organophosphates (OPs) is extremely harmful to children’s brains at critical windows of their development, ” said Emily Marquez, PhD, staff scientist at Pesticide Action Network and co-author of Kids on the Frontline. “While OP exposure is widespread, those who live in agricultural regions have much higher exposure and bear the brunt of the health harms.”

The study reported similar cognitive declines for three other classes of pesticide: neonicotinoids, pyrethroids, and manganese fungicides. The study authors point out that because pesticides are almost always used in combination, it is impossible to determine whether cognitive declines are caused by organophosphate use alone, or by the interactive effect with other classes of pesticide. Residents in agricultural areas are exposed to a complex mix of neurotoxic chemicals, which may interact in ways that are not currently considered by regulators. For this reason, advocates have pressed for comprehensive rules to protect children from nearby pesticide use, including at school.

“California kids need to be protected from exposure to chemicals that are known to rob them of their health and potential, ” said Mark Weller, co-director of the statewide coalition Californians for Pesticide Reform. “At the very least, these chemicals must be kept away from places where kids live, learn and play.”

Previous studies involving the CHAMACOS cohort have measured the amount of pesticide residue found in the body, and have linked high body burdens with a range of neurotoxic effects such as ADHD and diminished IQ, while other studies have shown a link to Autism Spectrum Disorder.

This study used California’s extensive Pesticide Use Reporting (PUR) data to gauge exposure to classes of pesticide that cannot be measured in people. This PUR data, mapped by the California Department of Health, reveal that in 245 one-mile square “sections” of Monterey and Santa Cruz counties, more than 522 pounds—which correlate to a 2 point IQ drop in the CHAMACOS study–of cholinesterase-inhibiting organophosphates were applied in each in 2014 (Drawn from database search at http://www.cehtp.org/page/pesticides/agricultural_pesticide_use_in_california).

Californians for Pesticide Reform is a diverse, statewide coalition of over 185 member groups working to strengthen pesticide policies in California to protect public health and the environment. Member groups include public and children’s health advocates, clean air and water groups, health practitioners, environmental justice groups, labor, education, farmers and sustainable agriculture advocates from across the state.