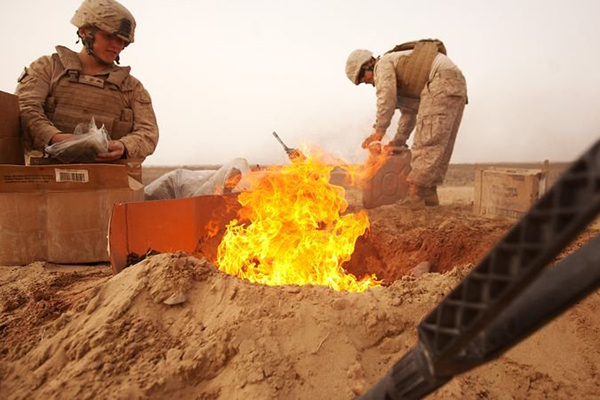 In 2007, shortly after vice-president Joe Biden learned that his eldest son would be deployed to Iraq, the then-presidential hopeful turned to a modest crowd at the Iowa state fair and admittedthat he didn’t want Beau to go.

“But I tell you what, ” he said, his family lined up behind him.

“I don’t want my grandson or my granddaughters going back in 15 years and so how we leave makes a big difference.”

He spent the next several months serving as a JAG (Judge Advocate General) officer at Camp Victory, just outside of the Baghdad airport, and Joint Base Balad, nearly 40 miles north of Baghdad.

Though he returned home safely in September 2009, he woke up one day a few months later with an inexplicable headache, numbness in his limbs and paralysis on one side of his body.

Beau had suffered a mild stroke.

His health deteriorated, and he was diagnosed with brain cancer.

Less than two years later, he died at the age of 46.

Though the underlying cause of Beau’s cancer cannot be confirmed, evidence gathered in a new book out Tuesday suggests a possible link between his illness and service.

Based on clusters of similar cases, scientific studies and expert opinions, author Joseph Hickman proposes in The Burn Pits: The Poisoning of America’s Soldiers that US service members in Iraq and Afghanistan confronted more than one unexpected enemy that followed them home.

Many soldiers complain of respiratory issues relating to their burn pit exposure.

But others likely developed more life-threatening conditions such as cancers, Hickman contends, because of what the burn pits were built on top of: the remnants of Saddam Hussein’s chemical weapons program.

From the moment the US launched its campaigns in Afghanistan and Iraq, the Pentagon ordered the use of open-air burn pits to dispose of the wars’ massive volume of waste.

The military relied heavily upon these sprawling ditches, which burned around the clock to consume the tens or even hundreds of tons of junk generated daily.

By May 2003, according to Hickman, there were more than 250 burn pits at US bases peppered across the two nations.

The Department of Defense has long recognized that burn pits pose a substantial danger, especially to the environment.

Waste management guidance in 1978, for instance, said that solid waste should not be burned in an open pit if an alternative is available, like incinerators.

But the department charged ahead anyway and hired contractors like Kellogg, Brown, and Root (KBR) to manage the pits.

And up until 2009, the military didn’t have comprehensive standards in place governing what could or could not be burned.

Centcom and the Department of Defense did not respond to a request for comment regarding the standards or lack thereof.

“I’ll never forget the smell of burning s***, ” said Marcus Hill, a retired US army sergeant who served in Balad between 2004 and 2007. But that was the least of his concerns.

These materials converged in a toxic plume that hovered over the base, and seeped into soldiers’ sleeping and working quarters, which were often a mile or less away. “Sometimes the smoke was so dense that you could breath it in and back out again, kind of like smoking a cigar, ” said Hill.

But for Hill and many others, the hazy cocktail didn’t initially register as a threat. “After being blown up a couple of times, you didn’t complain about stuff like that. It wasn’t a big deal, ” he said. “It was part of our mission and we were told not to worry about it.”

Hickman conducted a statistical study on a select sample of the thousands of military members who said they were experiencing health effects from their exposure to burn pits in Iraq and Afghanistan.

With the help of Seton Hall Law Center, he found that five of the six bases that saw the worst health cases, such as cancers and untreatable bronchial illnesses, were located on or neardocumented chemical warfare sites,  where chemical weapons were left over from Saddam Hussein’s rule.

Those locations include Mosul, Taji, Tikrit, Tallil and Balad, where Beau spent some time serving. And of the 112 service members and contractors Hickman found who served at both Camp Victory and Joint Base Balad like Beau, 31 suffered from different forms of cancers and brain tumors.

Between 2004 and 2011, the New York Times’ CJ Chivers first reported in 2014, American and American-trained Iraqi troops encountered and were wounded by some of the thousands of chemical weapons sprinkled across the country. Retired army Lt Col Rick Lamberth oversaw the building of US military bases in Iraq, many of which were placed on top of destroyed Iraqi bases. “I witnessed burn pit violations on a weekly basis, ” he testified before Congress in 2009.

“At the limited number of bases where KBR operated burn pits in Iraq and Afghanistan, KBR personnel did so safely and effectively at the direction and under the control of the US military, ” KBR said in a statement. “Government studies and reports show that military personnel deployed to south-west Asia were exposed to many hazardous conditions, including the harsh ambient air. The government’s best scientific and expert opinions have repeatedly concluded there is no link between any long term health issues and burn pit emissions.”

Ralph Allen, a retired professor of chemistry at the University of Virginia, disagrees. “It is a real concern about what they were burning, ” he said. “But what was even more concerning is the fact it is possible that a heavy bombardment of a chemical weapons facility could have contaminated the ground, and those contaminants could have become airborne while the burn pits were operational.”

Detonation, either inadvertent or purposeful, might not even be necessary to release the toxin. “In my experience, anything that is stored for a long time eventually gets into the environment, ” said Mozhgan Savabieasfahani, an independent toxicologist based in Ann Arbor, Michigan.

Once toxins are released into the environment, she argues, they eventually find their way into people’s bodies – whether they are carcinogens relentlessly spewed from burn pits or chemical agents released from weapons.

In 2004, Dr Anthony Szema returned from summer vacation to find a surprising scene in his waiting room. “Instead of it being full of 80-year-old white men in wheelchairs with oxygen, it was full of young women and men of all ethnicities, all wearing uniforms and all saying that they [were] short of breath, ” he said. They had recently come from Iraq and each wanted to be treated quickly to return to the fight.

Szema prescribed the young soldiers asthma medication. When most of the patients’ conditions did not improve, he conducted a series of tests and concluded that they had sustained lung injuries stemming from their service.

He recalls taking a lung biopsy of a patient who, like Beau, had served in Balad and discovered that the specimen was covered with titanium and iron in a non-naturally occurring ratio, meaning it came from a man-made source.

Now the director of a center focused on deployment health at Hofstra Northwell School of Medicine, Szema is analyzing more service members’ lung tissue to determine the metal particles’ oxidation state – if it has been burnt or not.

That, he says, will settle whether burn pits are directly contributing to soldiers’ illness or whether it was the product of other explosions.

The Environmental Protection Agency (EPA) warns that burned waste, even in a small pit in one’s own backyard, releases harmful toxins that contribute to a slew of illnesses. Dioxins, which the EPA says can come from metal smelting, are capable of altering the development of cells and causing cancer.

When Rosie Torres’s husband Le Roy went to the VA complaining of respiratory issues, it was dismissed as anxiety. He eventually sought the care of Dr Robert Miller of Vanderbilt University Medical Center, who determined Le Roy had constrictive bronchiolitis, a rare, non-reversible and life-threatening lung disorder.

The VA does not acknowledge a link between burn pits and long-term health problems, nor does it provide specialized care, says Torres. And of the 500 people included in Hickman’s burn pit study, the VA denied disability benefits to over 90% of them. Torres started an organization to promote awareness of burn pit-related illnesses, BurnPits 360°.

“I think that there is a general concern that this is a costly problem, ” Miller says of the government’s investigation and handling of sick veterans. “I think that has limited how aggressive the Department of Defense wants to be in pursuing this issue.”

“The VA and Department of Defense are working together to provide veterans with the best possible care, ” a VA spokesman said. “The VA provides healthcare for deployment-related issues at no cost for at least five years after deployment. This allows the VA to provide care for Veterans while we work to determine individual service connection for their health condition.”

Following years of fighting for recognition and care, Congress passed legislation in 2012 setting up an Airborne Hazards and Open Burn Pit Registry so the VA could track people like Le Roy. The registry currently has 59, 000 entries, according the VA. “So much more research needs to be done, ” Hickman says of the US’s toxic legacy and hidden casualties. “Hopefully the registry will shed some light on how many service members got sick in the years to come.”

REPORTS OF A DEADLY CHEMICAL ATTACK IN SYRIA