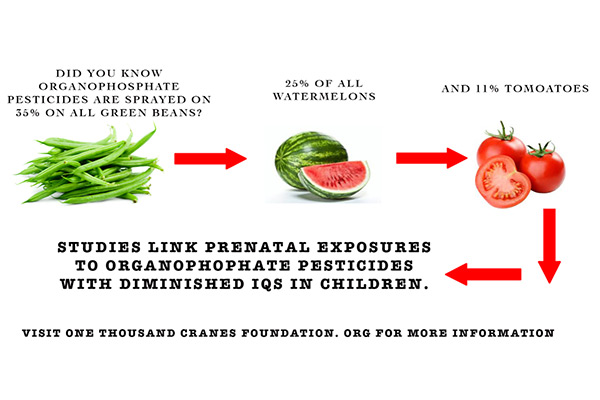 Three new papers link prenatal exposures to organophosphate (OP) pesticides with diminished IQs in children. Fruits and veggies are one continuing source of exposure to these bug killers. As to what we’re supposed to do with that knowledge — well, the Environmental Working Group, a Washington, D.C.-based advocacy organization, offers some guidance.

Ironically, the April 21 press release that EWG issued on the topic identified foods likely to host traces of pesticides — any pesticides, not necessarily OPs. So I contacted the organization and Sonya Lunder, a senior scientist there, tracked down a massive Environmental Protection Agency document on OPs that addressed (among other things) likely ingested sources. Parts of the report evaluated OP quantities measured on foods and then accounted to some degree for how big a share of the typical U.S. diet such foods might represent.

Overall, EPA found, toddlers are the most highly exposed age group in terms of likely single-day exposures. And just a few OPs contribute most of the dietary risk for all ages: methamidophos,  acephate and phorate.

Not every piece of produce will be tainted. And the data in EPA’s report are at least five years old. But its analysis does point to likely sources — ones that parents might prudently choose to regard with suspicion. For people who don’t choose to (or can’t afford to) buy organic, EWG advocates washing fresh produce well. Very well. This “won’t remove all of the residues, ” the group concedes, “but it does make a difference.”

Another of its recommendations: Eat foods that are in season. We can get apples, strawberries, lettuce and melons year round. But doing so often requires that they travel from another country — if not a distant continent. That isn’t in itself bad, except that many of these agricultural exporters are in developing nations that lack the relatively tight restrictions that U.S. farmers must adhere to when applying pesticides on food crops, including limits on how close to harvests the chemicals might be used.

Among foods that EPA found at the relatively low end of the scale in terms of contributions to OP risk: honeydew melons, strawberries, cooked tomatoes, canned cucumbers and peaches.