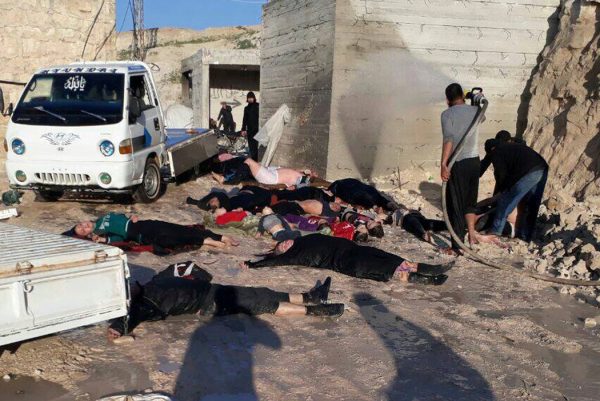 From the start, the chemical strike that killed dozens of people in northern Syria on Tuesday morning looked different from the chlorine gas attacks frequently used by the Syrian military. Videos and photographs showed victims with symptoms consistent with severe exposure to a nerve agent or some other deadly substance.

This article includes graphic scenes of injury and death.

Sarin attack in Syria with Child

The videos, shared by activists and residents, showed children and older people gasping and struggling to breathe. Here, a child is treated in the town of Khan Sheikhoun.

Medical workers and witnesses said that chlorine attacks, which have become frequent in northern Syria, usually kill just a few people, often those trapped in an enclosed space, and the gas dissipates quickly. This time, they saw people collapsing outdoors, in much larger numbers, and dozens of people died.

Some lay motionless in the mud as rescue workers ripped off victims’ clothes and hosed them down.

Witnesses said the gas was delivered by a government airstrike. The attacks raised the possibility that the Syrian government used a banned nerve agent, like sarin, after it agreed in 2013 to eliminate its chemical weapons program.

In this attack, the symptoms included pupils reduced to pencil-point dots, a marker associated with exposure to nerve agents. One doctor posted evidence of what he was seeing.

Other victims were seen foaming at this mouth, another possible symptom of nerve-agent exposure.

The attack appeared to be the most deadly chemical attack in Syria since August 2013, when more than 1,000 people were killed in the Damascus suburbs by the banned toxin sarin. The government has denied that it has used chemical weapons, arguing either that insurgents and Islamic State fighters use chemical weapons to frame the government or that the attacks are staged.

COMMON PESTICIDE MAY POSE RISK TO WORKERS WHO APPLY IT