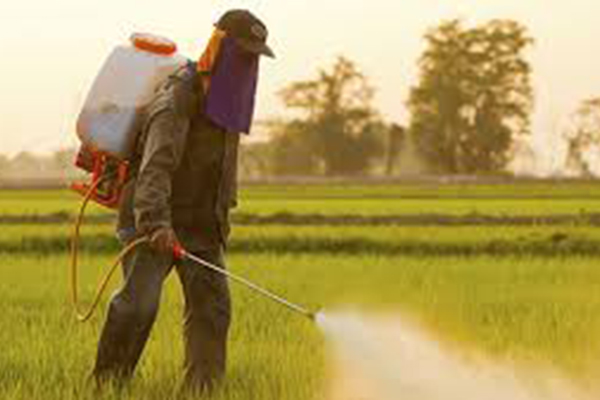 An insecticide used on corn and other U.S. crops poses health risks to workers who mix and apply it and also can contaminate drinking water, according to a U.S. Environmental Protection Agency report released this week.

The report is an update, based on new research, to a 2011 assessment of the health impacts of the pesticide chlorpyrifos (pronounced KLOR – pie -ra – phos), which remains one of the most commonly applied organophosphate pesticides. It has been banned for more than a decade for household use but is still used commercially on corn, soybeans, fruit and nut trees and some golf courses.

The findings may mean more restrictions to protect worker’s health and drinking water sources as the pesticide undergoes its registration review, a licensing process required of pesticides by the EPA.

Industry maintains chlorpyrifos is safe at levels currently in the environment and greatly benefits farmers. But some environmental organizations say that increasing restrictions will not do enough to protect people’s health.

“The science on health impacts – together with many personal stories -overwhelmingly supports the need for a phase out, ” said Margaret Reeves, a senior scientist at the Pesticide Action Network, in a statement. In 2007 the Pesticide Action Network North America and the Natural Resources Defense Council urged the EPA to ban all uses of chlorpyrifos.

In 2012 the EPA required homes and schools to have buffers to reduce exposure. The EPA estimates about 10 million pounds are applied annually in agriculture across the country.

The agency did not find any additional risks from airborne or food exposure. It cited the latest U.S. Department of Agriculture data that found “no concerns for chlorpyrifos in food, with the pesticide detected in less than 1 [percent] of samples.”

This bystander exposure is likely a “sub-clinical exposure” – where the mom would not experience any effects herself, but the constant chronic exposure in drift or house dust could impact an unborn child, Shelton said.

Chlorpyrifos is a neurotoxin that prevents the synapses of the nerves from stopping activity, causing over-stimulation, Shelton said. It has been linked to birth defects,  low birth weights and impaired brain development problems,  and endocrine disruption.

Fetuses are at much higher risk from the pesticide, she said.

“Adults have an enzyme that can metabolize organophosphates like chlorpyrifos, ” Shelton said. “That is something that only comes online after birth. So babies in the womb don’t have the metabolizing enzyme.

“If they’re exposed to a neurotoxin it would take much lower levels to see observable effects.” The EPA did not return requests to comment on the new report.

Despite household bans, some evidence suggests people are still exposed to the chemicals. A study of Northern California families and floor wipe samples last year found that 99 percent of floor wipes and 65 percent of study participants had some chlorpyrifos in them.

“We know there’s enough of a reason to prohibit residential use because of the neurodevelopmental impairments in children, ” Shelton said. “I do see cause for concern [with continued use].”

A spokesperson for Dow AgroSciences, which manufactures chlorpyrifos, noted that the EPA’s announcement is part of a revision, not the final assessment and that “no pest control product has been more thoroughly tested.”

But Nichelle Harriott, staff scientist with Beyond Pesticides, said the mounting evidence suggests chlorpyrifos poses “unacceptable risks to workers and the environment.”

“They [the EPA] should be moving toward getting the chemical off the market, that is the only acceptable way to protect human and environmental health, ” she said.

There is a 60-day comment period for the new announcement and the EPA plans to release a report on the chlorpyrifos impact on endangered species later this year.