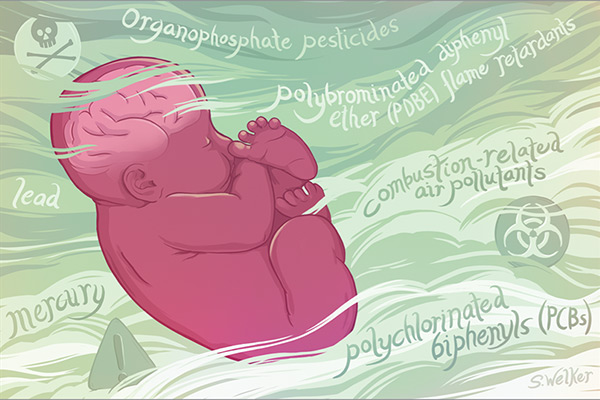 Citing an alarming increase in childhood neurodevelopmental disorders such as autism and attention-deficit/hyperactivity disorder (ADHD), a group of scientists, health professionals, and children’s health advocates is calling for increased monitoring, assessment, and reduction of neurotoxic chemicals. The Targeting Environmental Neuro-Developmental Risks (TENDR) Consensus Statement, published in July in Environmental Health Perspectives, is “a call to action to reduce exposures to toxic chemicals that can contribute to the prevalence of neurodevelopmental disabilities in America’s children.”

After reviewing evidence for brain and nervous system effects of more than 10 different chemical groups from studies of early life exposures and child development, the group—dubbed Project TENDR—called out “prime examples” of neurotoxic chemicals in its statement. The examples went beyond the usual suspects lead, mercury, and polychlorinated biphenyls (PCBs) to also include organophosphate pesticides, polybrominated diphenyl ether (PBDE) flame retardants, and combustion-related air pollutants.

These chemicals were singled out for strong evidence? of neurotoxicity in humans, along with widespread exposure and the feasibility of exposure reduction. But Irva Hertz-Picciotto, PhD, director of the University of California-Davis Environmental Health Sciences Center and Project TENDR codirector, emphasized that “these exemplar chemicals should not be misconstrued as the totality of the problem.”

The group agreed that emerging research on other chemicals, particularly endocrine-disrupting ones such as phthalates, also raises serious safety concerns. Hertz-Picciotto also pointed out that thousands of chemicals have not yet been tested for long-term effects on brain function resulting from prenatal and early childhood exposures.

“There has been an explosion of knowledge in the past decade showing that quite a long list of commonly used chemicals are capable of causing neurodevelopmental damage to children, especially if the exposure occurs in utero during the 9 months of pregnancy or in the first few years after birth, ” said Philip J. Landrigan, MD, dean for Global Health at Icahn School of Medicine at Mount Sinai in New York and one of 47 coauthors on the consensus statement. Nine health organizations including the American College of Obstetricians and Gynecologists and the Endocrine Society also endorsed or supported the statement.

According to current estimates from the Centers for Disease Control and Prevention, 1 in 10 US children has ADHD, while 1 in 68 has autism spectrum disorder (ASD). Intellectual disabilities, which are harder to measure, also appear to be on the rise, according to Linda S. Birnbaum, PhD, director of the National Institute of Environmental Health Sciences and the National Toxicology Program at the National Institutes of Health.

Factors like improved awareness and broadening of diagnostic criteria to include milder cases don’t fully account for the increase in these conditions, Hertz-Picciotto said. A 2015 study in JAMA Pediatrics found that changes in diagnostic criteria and the inclusion of outpatient data accounted for only 60% of the increase in the observed prevalence of ASDs in Danish children born between 1980 and 1991, for example.

Although chemical exposures are only 1 component contributing to the increase in neurodevelopmental disorders, they are a factor that can be reduced, the TENDR coauthors said.

Many of the associations occur with prenatal exposures, when the brain is developing at an incredibly rapid rate, Hertz-Picciotto explained. “Neurons are being formed at a rate of 250?000 per minute on average over the course of a pregnancy—and that’s a lot of opportunity for things to go awry, ” she said.

The results can be devastating if a toxic chemical gets into the developing brain at those vulnerable early stages, Landrigan said: “There could be loss of IQ, shortening of attention span, disruption of behavior—and those are effects that tend to last life long.”

Landrigan has coauthored 2 systematic reviews in Lancet and Lancet Neurology that together identified 11 industrial chemicals as developmental neurotoxicants in humans. The links between chemicals and disorders in children have been established mainly through a combination of toxicological studies in rats and mice and prospective epidemiological studies in humans, he explained.

Although randomized controlled trials aren’t possible in humans due to ethical concerns, causation is strongly suggested by animal research. “In almost all cases there’s animal data that provides biological plausibility to what we’re seeing in people, ” said Birnbaum, a coauthor on the consensus statement.

One goal of Project TENDR is to break the industry habit of replacing a proven toxic chemical with a similar untested agent that may be as bad or worse—a strategy known as “regrettable substitution.” The group asserts that regulators must also take into account the cumulative effects of exposures to multiple toxic chemicals and the fact that many chemicals have no established “safe” cutoff for exposure.

Because banning each potentially toxic substance altogether will likely be unrealistic, keeping levels under a certain limit could be an important piece to the regulatory puzzle. For example, the group is calling for a target maximum blood lead level for children of 1 µg per deciliter.

Perhaps most importantly, the burden of proof for environmental chemical safety should be shifted to more closely resemble how drugs are assessed: “Safety has to be proven first, ” Hertz-Picciotto said.

A step in the right direction came in June, when Congress passed an amendment to the Toxic Substances Control Act that for the first time includes provisions to protect the health of children and pregnant women. “Now, EPA [Environmental Protection Agency] needs to be given the funds… to enforce that law, ” Landrigan said.

Toxicology testing must also evolve. With thousands of untested chemicals being pumped into the environment, “We’ve got to move to test faster, cheaper, smarter, ” Birnbaum said.

A movement toward contemporary approaches—such as high-throughput screening across multiple assays and testing in human cell cultures, human organoids, and vertebrate models in short-lifecycle species such as zebra fish—will accelerate research, she said. Studies should also routinely look for functional changes to behavior and cognition, not just birth defects, she added.

In the meantime, Birnbaum said physicians can ask questions about their patients’ exposures and help mitigate them. Pregnant women can be instructed to follow fish advisories for mercury, for example, and farmworkers who are exposed to pesticides can be encouraged to change clothes before coming home. Because neurodevelopmental disorders tend to be multifactorial, reducing a single exposure can make a difference in disease development or severity, Hertz-Picciotto said.

“The fact that physicians in particular have been largely silent about this issue has created the sense that it’s not real, and I think they can help shed light on the key importance of this, ” Hertz-Picciotto said.